The weather: cold, very cold. 8 degrees below cero in some areas of the capital. The coldest night so far this year.

Rows and rows of people, in fact, millions of people, queuing. What are they waiting for?

They are waiting for the tickets for the cultural event of the century: Plácido Domingo brings Pablo Neruda to life in the operatic version of “Il Postino”. (For more information, you can read the article in Spanish by clicking here.) 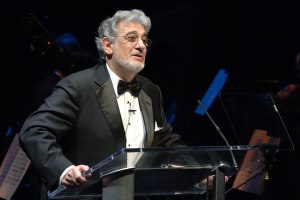 Plácido Domingo is unique. He’s not only one of the most respected and revered opera singers in the world, but also a producer, administrator and general champion for the arts. Yes, he became incredibly famous worldwide when he toured with the three tenors (although anyone who knew anything about opera or classical music would have heard about him way before then) but I have allocated him the letter “D” because of what he is doing for music in Spain and the rest of the world. (For more information on this than I am able to give you in this humble blog, see his official website.)

At the age of 71, he continues to draw crowds, not just because of his artistic talent, but also because of his charismatic personality. I’m not an opera fan myself, but in a similar way to how I grew up hearing about Severiano Ballesteros (see B is for Seve Ballesteros), I grew up hearing about Plácido Domingo. Last year, I watched him being interviewed on the BBC and realised how, even after being the most successful opera singer currently around, he remains humble and committed to his audience. (Don’t take my word for it and have a look at the interview on YouTube.)

If I rest, I rust.
Plácido Domingo

You can clearly see how the man doesn’t rest. He was the General Director of  the Washington National Opera for fifteen years; he was the man responsible for kicking off the Musical Theatre genre in Spain when he produced Los Miserables for the first time in Madrid in 1992 (for more on this see the A to Z chapter Z is for Zarzuela); and he is directly involved in ensuring the world has a new generation of singers and musicians through the Centre de Perfeccionament Plácido Domingo in the Ciudad de las Artes y las Ciencias in Valencia.

His wonderful name (which means “peaceful Sunday”) has even made it into the Spanish jargon through the (bad) joke:

I leave you now on this very pleasant Tuesday afternoon.

2 thoughts on “D is for Plácido Domingo”